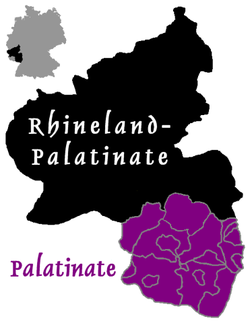 Location of Palatinate in Rhineland-Palatinate

The Palatinate (germ.:Pfalz), historically also Rhenish Palatinate (lat.: palatinatum Renensis; germ.: Rheinpfalz), is a region in south-western Germany. It occupies more than a quarter of the German federal state (Bundesland) of Rhineland-Palatinate (Rheinland-Pfalz).

The western and northern part of the Palatinate is densely forested and mountainous. The highest point is the Donnersberg (687 m (2,253.9 ft)) near Kirchheimbolanden. The Palatinate forest (Pfälzerwald) covers more than a third of the region and is the largest uninterrupted forest in Germany. The eastern part is lower, and is a well known wine region, the Palatinate wine region through which passes the German wine road (Deutsche Weinstrasse). Most of the cities of the Palatinate (Ludwigshafen, Speyer, Landau, Frankenthal, Neustadt) lie in the Rhineplain in the east.

Administratively, the following districts and independent cities are part of the Palatinate: