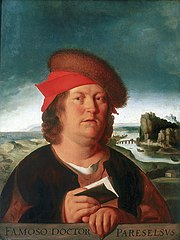 Paracelsus (11 November or 17 December 1493 in Einsiedeln, Switzerland – 24 September 1541 in Salzburg, Austria) was an alchemist, physician, astrologer, and general occultist. The name "Paracelsus" was a nickname: it means "equal to or greater than Celsus", and refers to his medical skill.[1] He was born Phillip von Hohenheim.[2]

He gave zinc its name (in Latin as "zincum").[5] He also named the cyanobacterium Nostoc, which is a long-chain colonial bacterium. The adjective "bombastic" comes from his family name. It refers to his arrogance.

Paracelsus was responsible for the creation of laudanum, an alcoholic herbal opium preparation. It was in common use up to the 19th century. Like most of the alchemists, he was a notable botanist.[6] He wrote various books, but especially his major work (title translated as: On the miners' sickness and other diseases of miners). This listed the occupational hazards of metalworking, including treatment and prevention strategies. He also wrote a book on the human body which contradicted Galen's ideas.