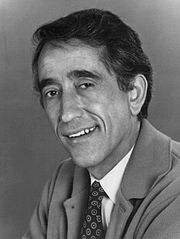 Patrick Layton "Pat" Paulsen (July 6, 1927 – April 24, 1997) was an American comedian and actor, whose longest-running role was as a perennial "candidate" for President of the United States.

Paulsen was born in South Bend, Washington. Paulsen had served in the United States Marines during World War II. After the war, he went to college, and worked a variety of jobs (as a salesman, an , a truck driver, and others) before starting a comedy with his brother. After the troupe broke up, Paulsen started performing on his own. He played at many of the same as the Smothers Brothers, before they became famous.

After the Smothers Brothers began a television variety show (The Smothers Brothers Comedy Hour) in 1967, they invited Paulsen to join their regular cast. He wrote for the show, and also appeared on camera in different roles. He began a series of mock editorials, that became very popular, by both poking fun at extremist opinions, and giving people reasons to think and talk about important issues (the First Amendment, gun control, drugs, and other matters). Hundreds of viewers wrote to CBS, who broadcast the Comedy Hour, to ask for copies of the editorials.

During 1968 (an election year in the United States), Paulsen began a pretend "campaign" for President, and used the campaign to show the humor and irony in American politics. He did many of the things a real candidate would do, making public appearances, giving speeches, granting media interviews, and making his "stand on the issues" well known. When Election Day came, people in many places around the United States really did vote for Paulsen, as a candidate, because they were not satisfied with what the real candidates (Republican Richard M. Nixon, Democrat Hubert Humphrey, Alabama governor George Wallace, and others) promised to do as President.

After The Smothers Brothers Comedy Hour ended in 1969, Paulsen continued to work as a comedian and actor. Instead of just making people laugh, he often drew their attention to problems in American society, such as pollution, prejudice, and poor government. During the 1970s, he bought the Cherry County Playhouse, a theater in Traverse City, Michigan that showed .

Paulsen sometimes reunited with the Smothers Brothers, and usually staged another pretend campaign every election year. In 1992 he chose singer Tiny Tim as his , to become his Vice President. Paulsen died on April 24, 1997 from pneumonia from complications of brain and colon cancer, during medical treatment in Tajuana, Mexico, he was 69 years old. He is survived by his wife Noma Paulsen.