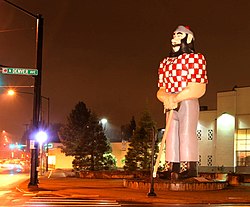 James Stevens wrote a book called Paul Bunyan in 1925. This book said that French Canadians people made up the Paul Bunyan stories during the Papineau Rebellion of 1837, when they were fighting against England.[1] This would explain why Paul Bunyan's last name is "Bunyan", because "Bunyan" sounds like the French-Canadian slang word "Bonyenne", which is something that they might say when they are surprised, like how people who speak English might say "Good Grief" or "My Goodness". People told other people stories about Bunyan, and the stories would change a little bit as they spread from person to person. Often, Paul Bunyan is shown in pictures with a giant blue ox named Babe. Historians think that Babe was not created until the 20th century for advertising. Other theories is that the Paul Bunyan was based on the legendry "Big Joe Mufferaw" [aka French-Canadian lumberjack Joseph Montferrand [1802-1864] [2]. or on a French-Canadain lumberjack in Michigan named Fabian "Joe" Fournier [1845-1875][3][4]

According to legend, when Bunyan was born, it took three storks to carry him. (In some stories storks carry babies and drop them off at their parents' houses.). When he became older, he broke every window in the house when he clapped or laughed. When he was seven months old, he sawed the legs off his parent's bed in the middle of the night.[5] Paul and his friend, Babe the Blue Ox, dug the Grand Canyon when Paul was carrying his axe and dragging it behind him. Babe, Bunyan's friend, was a large and very strong animal.[6]

Many different towns say that they are the "home" of Bunyan. Some of these towns are in Minnesota, Michigan, and Wisconsin, although there are towns in other states, too.

In the town of Kelliher, Minnesota, there is a park called Paul Bunyan Memorial Park, where there is a grave site that says that Paul Bunyan is buried there.