Paul di Resta (born April 16, 1986 in Livingston West Lothian) is a Scottish auto racing driver. He is the current DTM champion. He make his Formula One debut in the 2011 Australian Grand Prix with the Force India, finishing in the points with a 10th place finish.

Di Resta started his career in karting. He raced in several series of karts from 1994 until 2002. In 2001 he won the British JICA Championship.

Di Resta moved up to single-seaters at the end of 2002. he competed in the British Formula Renault Winter Series. He raced full-time in 2003 with the Eurotek Motorsport team. Di Resta finished seventh in the standings with one race win. He switched to Manor Motorsport for 2004, and finished third in the championship with four wins. Di Resta also entered some races of Eurocup Formula Renault 2.0 with the Manor team. He also won the prestigious McLaren Autosport BRDC Young Driver of The Year Award in 2004. The award had been won by his cousin Dario Franchitti in 1992.

Di Resta moved to the Formula Three Euroseries with Manor Motorsport in 2005, and finished tenth in the standings. For 2006 he moved to the ASM Formule 3 team. He won the championship with five wins. He beat his team mate, future Formula One World Drivers Champion, Sebastian Vettel. Di Resta also won the 2006 BP Ultimate Masters at Circuit Park Zandvoort.

In 2007, di Resta switched from single-seaters to race in the Deutsche Tourenwagen Masters (DTM) touring car racing series for Mercedes. He finished fifth in the championship. Di Resta was the highest driver in the standings to drive a non-2007 car. His performance earned him a 2008 Mercedes C-Class for the 2008 season. Di Resta finished second in the 2008 championship, winning two races. In 2009, he finished third overall. In 2010, he won three races in a row on the way to winning the DTM championship. 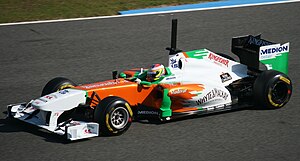 Di Resta during pre-season testing at Jerez in February 2011.

Di Resta has tested for the McLaren Formula One team in 2009. In December 2009, di Resta took part in a test with the Force India at the Jerez circuit.[1] On February 2, Force India announced they signed di Resta at their reserve driver.[2]

On 26 January 2011 it was confirmed that di Resta will join Adrian Sutil at the Force India team for the 2011 season. He will replace Vitantonio Liuzzi, and Nico Hülkenberg will replace di Resta as the reserve driver.[3]

* Season in progress.
† – As di Resta was a guest driver, he was ineligible to score points.

Di Resta, who grew up in Uphall West Lothian. He is the cousin of fellow racing drivers Dario Franchitti and Marino Franchitti.[4] In February 2010, di Resta was made a director of his family's leisure firm, which owns several establishments in West Lothian.[4]