The 2012 Formula One season was the 63rd season of the Formula One World Championship. The season had twenty races, which started in Australia on 18 March and ended in Brazil on 25 November. The 2012 season saw the return of the United States Grand Prix, which was held at the Circuit of the Americas, a circuit in Austin, Texas.[2] After being cancelled in 2011 due to civil protests,[3] the Bahrain Grand Prix also returned to the calendar.[4]

The start of the season was unpredictable, with seven different drivers winning the first seven races of the championship;[5] a record for the series. It was not until the European Grand Prix in June that a driver, Ferrari's Fernando Alonso, won his second race of the year.[6] Alonso was the championship leader for the next seven races, taking his third win in Germany[7] and finishing on the podium in the United Kingdom,[8] Italy[9] and Singapore.[10] However, first-lap retirements in Belgium[11] and Japan[12] allowed his rivals to catch up, and defending World Champion Sebastian Vettel — like Alonso, a two-time winner — took the lead in the sixteenth race of the season. Vettel, too, encountered difficulties throughout the season; contact with a backmarker left him to finish outside the points in Malaysia,[13] while alternator failures at the European[6] and Italian Grands Prix[9] cost him valuable points and exclusion from qualifying in Abu Dhabi led him to start from the pit lane.[14] Vettel entered the final race of the season with a thirteen-point lead over Alonso. Alonso needed a podium finish to stand any chance of becoming World Drivers' Champion, but in a race that finished under the safety car, Vettel finished in sixth place, scoring enough points to win his third consecutive championship,[1] becoming the third driver to do so. In the World Constructors' Championship, Red Bull Racing secured their third consecutive title when Sebastian Vettel finished second at the United States Grand Prix.[15]

In addition to seeing seven different winners at the first seven races, the season also had the most races ever in a season with twenty, beating the last record of nineteen, which was first set in 2005. Six current or former World Drivers' Champions — Sebastian Vettel, Fernando Alonso, Jenson Button, Lewis Hamilton, Kimi Räikkönen, and Michael Schumacher — started the season, breaking the record of five established in 1970.[16]

The pre-season testing season began immediately after the 2011 Abu Dhabi Grand Prix with a three-day 'Young Driver Test' (for drivers with fewer than three Formula One race starts to their name) at the Yas Marina Circuit from 15–17 November 2011.[17] Toro Rosso test driver and Formula Renault 3.5 Series runner-up Jean-Éric Vergne was the fastest driver in every session over the three-day test, driving for Red Bull Racing.[18] The Young Driver Tests also saw the debut of Pirelli's 2012 tyre compounds, with all bar one of the tyre compounds used in 2011 having undergone significant revisions.[19] Several teams, including Williams[20] and Mercedes[21] used the tests as an opportunity to test parts for the 2012 season in the face of a ban on exhaust-blown diffusers.

After a dispute between the Formula One Teams Association and the FIA in the first half of 2009, a new Concorde Agreement was signed on 1 August 2009 by the then FIA president Max Mosley and all of the existing teams at the time. The new agreement provides for a continuation of the terms of the 1998 Concorde Agreement, and runs until 31 December 2012.[22]

As a result of the name changes, Team Lotus and Lotus Renault GP declared that their ongoing dispute over the use of the Lotus name was over after they had reached an "amicable conclusion".[72] Although the exact terms of the settlement were kept confidential, the joint statement detailed the transfer of the rights to the Lotus and Team Lotus names to Group Lotus' ownership.[73]

Kimi Räikkönen — seen here at the 2010 Rallye Deutschland — will be one of six current and former World Drivers' Champions racing in 2012. Räikkönen will race for Lotus F1.

Bernie Ecclestone has expressed a desire to see the calendar expand to a record twenty rounds, the maximum he feels is viable. However, a provisional calendar was announced in June 2011, with a record twenty-one races.[92] FIA President Jean Todt later clarified this position, stating that the 2012 calendar would have no more than twenty races,[93] but gave no indication as to which race would be removed from the calendar. On 29 July 2011, a second provisional calendar was released, confirming that the Turkish Grand Prix would be discontinued.[94] The final calendar was released on 7 December 2011.[4] 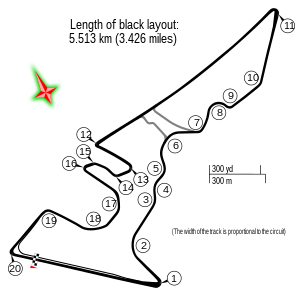 The 2012 season will see the reintroduction of the United States Grand Prix after a five-year absence, with the race to be held at the Circuit of the Americas near Austin, Texas. The circuit design was inspired by the Silverstone, Hockenheim and Istanbul Park circuits.[111]

Points are awarded to the top 10 classified finishers.

[[Category:2012 in sports|Formula One seas