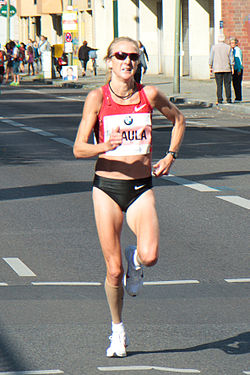 Paula Radcliffe at the 2011 Berlin Marathon

Paula Jane Radcliffe MBE (born 17 December 1973) is a British long-distance runner. She is the current women's IAAF world record holder for the marathon with a time of 2:17:42 hours.[1] She also ran the IAAF women's world best time of 2:15:25 hours. She is a three-time winner of the London Marathon, two-time New York Marathon champion, and won the 2002 Chicago Marathon.

Radcliffe is a former world champion for the marathon, half marathon and cross country races. She has also been European champion over 10,000 metres on the track and over the cross country races. On the track, Radcliffe has also won the 10,000 metres silver medal at the 1999 World Athletics Championships and was the 2002 Commonwealth Games gold medalist over 5,000 metres. Radcliffe has won many awards including the BBC Sports Personality of the Year, Laureus World Comeback of the Year, IAAF World Athlete of the Year, AIMS World Athlete of the Year (three times) and a Member of the Order of the British Empire (MBE).

Radcliffe is an asthmatic sufferer who has voiced her opposition to the use of drugs in sport. She is married to her coach, Gary Lough, and has two children. Radcliffe is the great niece of Charlotte Radcliffe, who won an Olympic silver medal in the 1920 Games.

Radcliffe has often made comments about drugs in sport. Radcliffe backed the IAAF after Olga Yegorova was caught using drugs.[2] Radcliffe and team-mate Hayley Tullett caused trouble in the heats of the 5,000 metres at the 2001 World Athletics Championships. They held up a sign protesting against Yegorova. Yegorova had been caught using, EPO, but was allowed to race. The sign was made by Radcliffe's husband and said 'EPO Cheats Out'. It was taken off them by the stadium officials. But not before it was seen on television.[3] Team mates Kathy Butler and Hayley Yelling also demonstrated in the final. They were seen wearing Radcliffe masks and held up signs, one of which said 'Free Paula'.[4] Radcliffe said after the Championships that she would continue her fight against drugs in sport.[5] Radcliffe wears a red ribbon when racing to show her support for blood testing as a method of catching drugs cheats.[3] Radcliffe first wore the ribbon at the 1999 European Cup.[6] This was encouraged by Blandine Bitzner-Ducret.[7] At the end of 2001 Radcliffe was given the choice not to race against Yegorova in televised meetings in the United Kingdom.[8]

During Radcliffe's highly successful 2002 season, foreign media, were convinced that she was taking drugs. But Radcliffe asked UK Sport to reveal her drugs tests. They showed that she had been tested five times and on each occasion was clean.[9][10] Radcliffe said she was unhappy with the whispers coming from French newspaper L'Equipe. She asked for the IAAF to conduct random blood and urine samples before the Chicago marathon. She also asked them to freeze the samples so when tougher testers are developed they can prove that she ran clean.[11][12]

Paula Radcliffe was born to Peter and Pat Radcliffe.[13] She was born on the 17 December 1973 in Cheshire.[14] Radcliffe is the great-niece of 1920 Olympic Silver medalist Charlotte Radcliffe.[15] Radcliffe has a brother. Martin. He is two years younger than her.[16] Radcliffe's family moved to Oakley, Bedfordshire when she was 11. Radcliffe achieved four A levels at grade A in French, German, Maths and General Studies, while at Sharnbrook Upper School in Sharnbrook, Bedfordshire. Radcliffe had a choice between Loughborough and Cambridge for University. She chose Loughborough. In 1996 she finished her degree a few months early so she could prepare for the Olympic Games.[16]

Radcliffe met her husband Gary Lough at Loughborough University.[17] At University Radcliffe studied French, German and economics. She left university with a first-class honours degree in modern European studies.[18] Lough and Radcliffe married in 2000.[19][20][21] They have two children. In 2007 they had their first child, Isla.[22] Their second child, Raphael, was born on 29 September 2010.[23] But had to be resuscitated as he had his Umbilical cord wound round his neck.[24] Radcliffe first said of wanting to start a family in.[25]

In the 2002 Queen's Birthday Honours, Radcliffe was awarded an MBE.[26][27][28] In October she was given her MBE saying; "It means a great deal to me, it's a great honour and it really tops off an amazing year. To come here and receive this and to meet the Queen at the end of it just finishes it off perfectly."[29] Radcliffe became the first Britain in 2006 to win the Abebe Bikila Award.[30] At the end of 2010 Radcliffe was voted England Athletics athlete of the decade.[31][32][33]