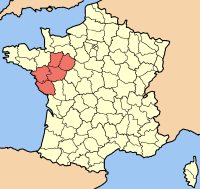 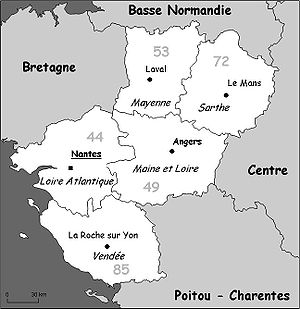 The region is made of 5 départements

Pays de la Loire (or Pays-de-la-Loire) is one of the 27 regions of France. Its capital is Nantes. In 2005 about 3.2 million people lived in the region.

The departments in the region are:

The economy is centered around the production of food, and agriculture in general. It is the third in France in that sector. 51% of meat products, 19% of milk, and 67% of the natural produce of grain (cereals) are produced there.

The region is fifth in terms of total land area, after Midi-Pyrénées, Rhône-Alpes, Aquitaine and Centre.