A one server based network. 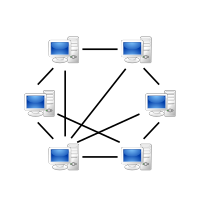 A peer-to-peer based network.

In Computer science client-server is a software architecture model consisting of two parts, client systems and server systems, both communicate over a computer network or on the same computer. A client-server application is a distributed system consisting of both client and server software. The client process always initiates a connection to the server, while the server process always waits for requests from any client. When both the client process and server process are running on the same computer, this is called a single seat setup.

Another type of related software architecture is known as peer-to-peer, because each host or application instance can simultaneously act as both a client and a server (unlike centralized servers of the client-server model) and because each has equivalent responsibilities and status. Peer-to-peer architectures are often abbreviated using the acronym P2P.

The client-server relationship describes the relation between the client and how it makes a service request to the server, and how the server can accept these requests, process them, and return the requested information to the client. The interaction between client and server is often described using sequence diagrams. Sequence diagrams are standardized in the Unified Modeling Language.

Both client-server and P2P architectures are in wide usage today.

The basic type of client-server architecture employs only two types of hosts: clients and servers. This type of architecture is sometimes referred to as two-tier. The two-tier architecture means that the client acts as one tier and server process acts as the other tier.