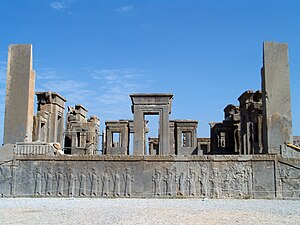 Persepolis (Old Persian: 'Pars', New Persian: تخت جمشید, 'Takht-e Jamshid') was an ancient capital of the second Iranian dynasty, the Achaemenid Empire. Ancient Persians called it Parsa, meaning the city of Persians. Persepolis (Greek: Περσες πόλις) is the Greek translation of the name. In modern Iran, the city is known as Takht-e-Jamshid (Throne of Jamshid). The largest building in Persepolis is the Apadana Hall with 72 columns. The Tachara palace built by Darius I is also an important building. The Hadish palace in Persepolis was started by Xerxes and finished by his son Artaxerxes.