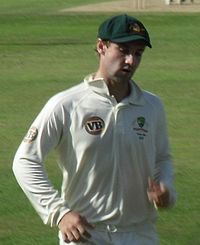 Phillip Joel Hughes (30 November 1988 – 27 November 2014) was an Australian Test and One-Day International (ODI) cricketer. He played for South Australia and Worcestershire. He was a left-handed opening batsman who played for two seasons with New South Wales before making his Test debut in 2009 at the age of 20.[1] Hughes was born in Macksville, New South Wales.

During a Sheffield Shield match between South Australia and New South Wales at the Sydney Cricket Ground on 25 November 2014, Hughes was hit in the head by a bouncer from New South Wales bowler Sean Abbott after mistiming his shot. He was taken to hospital. Hughes died two days later from his injuries at a hospital in Sydney, aged 25.[2][3]