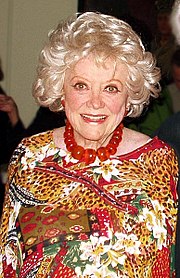 Phyllis Ada Driver (July 17, 1917 – August 20, 2012) was an American voice, movie and stage actress and comedian who makes self deprecating jokes about her age and her terrible cooking. She has performed in many movies and television programs.

Diller was born on July 17, 1917 in Lima, Ohio. She was of German and Irish descent. She was educated at Bluffton College, she was the classmate of Hugh Downs.

Diller's career would begin in 1952 and would later appear in almost 100 of movies and television programs, her movie include; The Fat Spy, The Boneyard, Happily Ever After, Silence of the Hams, and in A Bug's Life. Her television programs appearances also include; Alice Through the Looking Glass, The Pruitts of Southampton aka The Phyllis Diller Show, The Muppet Show, Hey Arnold!, The Powerpuff Girls and as Peter Griffin's mother in Family Guy.

Diller married Sherwood Anderson Diller from 1939 to 1965. Second and thirdly, she married Warde Donovan from 1965 to 1966, and again they married until they divorced again in 1974. She had a partner Robert P. Hastings from 1985 until his death in 1996.[1] She had six children with her first husband.