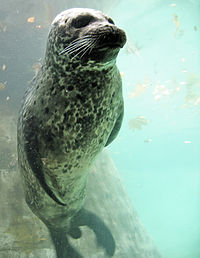 Pinnipeds [1] are the seals and their relatives, a group of semi-aquatic marine mammals. The Pinnipedia is in the Order Carnivora. There are three seal families: Odobenidae (walruses), Otariidae (eared seals, including sea lions and fur seals), and Phocidae (true seals).[2]

Seals are sleek-bodied and barrel-shaped. Their bodies are well adapted to the aquatic habitat where they spend most of their lives. Pinnipeds have flippers for hands, big bulky bodies, doggish faces, and big eyes. Unlike cetaceans, pinnipeds have their noses on their faces, and each nostril of the nose closes when the pinniped goes underwater. Like cetaceans, pinnipeds have a thick layer of blubber (fat) just under their skin: this blubber keeps them warm in cold waters and keeps them fed during times when food is not easily found. When they cannot find food, they live off the fat in the blubber.

Pinnipeds are carnivorous. This means they eat only meat (such as fish or squid) and not plants. However, almost all pinnipeds can be eaten by polar bears, sharks and killer whales.

Seals are often trained in zoos or aquariums to put on shows. However, in Sweden, it is illegal to train a seal to balance a ball on its nose.[3]

Pinnipeds sleep in the water.[4] They may also sleep on land. In both environments, there is a danger. At least in the northern hemisphere, there is danger from polar bears on land, and in the water, there is danger from sharks.[5] While sleeping in water, the animals go through different stages of sleep. They do some behaviors during sleep: they come to the surface occasionally to breathe, and they now and then open an eye for a period of time.[4] The details vary in different species or groups. Similar adaptations are found in cetaceans like dolphins.