KidzSearch Safe Wikipedia for Kids.
(Redirected from Pirates)
Jump to: navigation, search
For illegal copying of computer files, see software piracy.
Piracy is a crime that is committed on ships which are at sea. Pirate is the name given to those people. They usually have small and fast boats. They use these boats to attack other ships, which are usually large cargo ships.[1]

The Jolly Roger flag is a well known symbol of pirates

For as long as ships have sailed the sea, there have been pirates. Ancient Egypt and Greece, the Romans, Medieval kings, and the British Empire dealt with pirates. Sometimes fighting pirates has been one of the most important jobs of a navy. 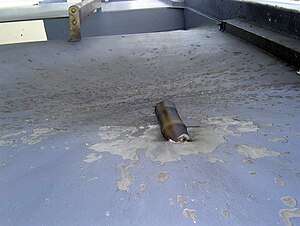 What was left of a rocket-propelled grenade that struck the Seabourne Spirit, when it was attacked by pirates, in 2005.

A lot of piracy still happens nowadays in the Gulf of Aden, mostly by Somali pirates.[1] Modern-day pirates usually climb onto ships to get money. In the process, they may kill the crew, or hold them for ransom. In a very few cases, they may also take over the ship and sell its cargo.

The cargo ships that travel the oceans are huge. They usually have very few crew members working on them. Since the ships are so big, they often carry a lot of money in the ship's safe. This money is used to pay the crew, and to pay for the taxes to stay at a port, or to pass through a channel.