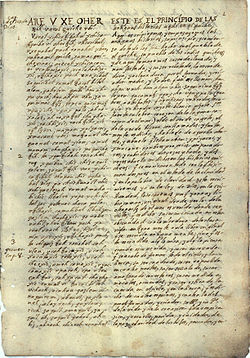 First page of the Rabinal Manuscript of the Popol Vuh, kept in the Newberry Library, Chicago, the Ayer Collection

The Popol Vuh' (K'iche for "Council Book" or "Book of the Community"; Popol Wu'uj in modern spelling) is a book written in the Classical Quiché language. It contains mythological stories and a genealogy of the rulers of the Post-Classic Quiché Maya kingdom of highland Guatemala.

The book contains a creation myth followed by mythological stories of two Hero Twins: Hunahpu (Modern K'iche': Junajpu) and Xbalanque (Modern K'iche': Xb‘alanke). The second part of the book deals with details of the foundation and history of the Quiché kingdom.

The book is written in the Latin alphabet, but it is thought to have been based on an original Maya codex. The original manuscript which was written around 1550 has been lost, but a copy of another handwritten copy in the early 18th century exists today in Chicago.

The significance of the book is enormous since it is one of a small number of early Mesoamerican mythological texts — it is often considered the single most important piece of Mesoamerican literature.

This is a very general summary; divisions depend on text version

The book begins with the creation myth of the K'ichee' Maya, which credits the creation of humans to the three water-dwelling feathered serpents:

There was only immobility and silence in the darkness, in the night. Only the Creator, the Maker, Tepeu, Gucumatz, the Forefathers, were in the water surrounded with light. They were hidden under green and blue feathers, and were therefore called Gucumatz...

and to the three other deities, collectively called "Heart of Heaven":

Then while they meditated, it became clear to them that when dawn would break, man must appear. Then they planned the creation, and the growth of the trees and the thickets and the birth of life and the creation of man. Thus it was arranged in the darkness and in the night by the Heart of Heaven who is called Huracán. The first is called Caculhá Huracán. The second is ChipiCaculhá. The third is Raxa-Caculhá. And these three are the Heart of Heaven.

who together attempted to create human beings to keep him company.

Their first attempts proved unsuccessful. They attempted to make man of mud, but man could neither move nor speak. After destroying the mud men, they tried again by creating wooden creatures that could speak but had no soul or blood and quickly forgot him. Angered over the flaws in his creation, they destroyed them by tearing them apart. In their final attempt, the “True People” were constructed with maize. The following is an excerpt of this myth:

They came together in darkness to think and reflect. This is how they came to decide on the right material for the creation of man. ... Then our Makers Tepew and Q'uk'umatz began discussing the creation of our first mother and father. Their flesh was made of white and yellow corn. The arms and legs of the four men were made of corn meal.

The Popol Vuh continues to be an important part in the belief system of many Quiché.

Here are the opening lines of the book, in modernized spelling and punctuation (from Sam Colop's edition):

"This is the root of the ancient word
of this place called Quiché.
Here
we shall write,
we shall plant the ancient word,
the origin
the beginning of all what has been done in the
Quiché Nation
country of the Quiché people."

Here is the opening of the creation story:

"This is the account of how
all was in suspense,
all calm,
in silence;
all motionless,
all pulsating,
and empty was the expanse of the sky.