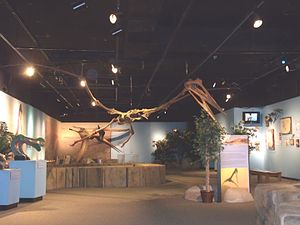 Pterodactyloidea is the suborder of short-tailed pterosaurs. Their fossil record starts in the middle Jurassic. They became extinct in the K/T extinction event at the end of the Cretaceous period. Pterodactylus, Pteranodon and Quetzalcoatlus are in this suborder.

In 2014 remains of the earliest pterodactyloid was found in China. It is called Kryptodrakon. Its minimum age was 162.7 million years ago (mya). This is about five million years older than any previously known confirmed specimens.[1]

Recent work shows that the group had more variety at the end of the Cretaceous than was thought earlier. In the early 2010s, several new pterosaur taxa were discovered dating to the late Cretaceous.[2][3] These finds include some small sized pterosaur species.[4][5]

At the end of the Cretaceous period, the Cretaceous–Paleogene extinction event, which made all non-avian and most avian dinosaurs, as well as many other animals, extinct. The pterosaurs seem to have gone extinct in this event.

This is the classification of the different divisions of pterodactyloidea: