The white cliffs of Dover 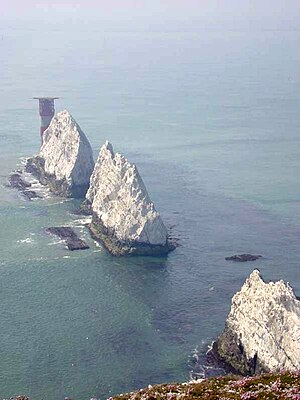 The Needles: here the lines of flint in the chalk can be clearly seen. 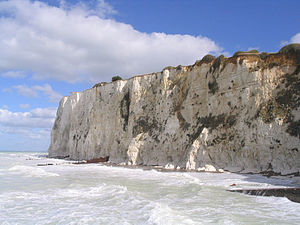 The Cretaceous is traditionally divided into Lower Cretaceous (early), and Upper Cretaceous (late), because of the different rocks. The rocks reflect the conditions in which they were formed. From lowest to highest, it is subdivided into the Cenomanian, Turonian, Coniacian, Santonian, Campanian, and Maastrichtian ages.

The Upper Cretaceous is the time of chalk. Chalk is composed of countless millions of calcareous (CaCO3) plates called coccoliths. They are so small they can only just be seen with a light microscope; details require an electron microscope. The plates are formed by single-celled planktonic algae called coccolithophores, and were laid down in the off-shore seas.

The only other rock found in chalk is the flint, which is siliceous (silica, SiO2). This derives from those algae and animals which have skeletons of silica. Undoubtedly, this marks periods when the climate was somewhat different.

The Cretaceous was the last period when dinosaurs were the dominant land animals. Triceratops, Tyrannosaurus and Velociraptor lived at this time. The huge Mosasaurus was the dominant marine predator. In the Cretaceous period, birds became more diverse. Flowering plants developed more, and became the dominant plants on land. The Upper Cretaceous ended with the K/T extinction event.

The end of the Cretaceous period is marked by the huge extinction event which marked the end of the dinosaurs. However, many groups had already disappeared long before then. There was an earlier extinction event in the Upper Cretaceous at the Cenomanian–Turonian boundary, about 95 to 90 million years ago. All we know about it is that there was huge volcanic activity which led to changes in sea life.

The event brought about the extinction of the pliosaurs, and most ichthyosaurs, and most lines of pterosaurs. Although the cause is uncertain, the result starved the Earth's oceans of oxygen for nearly half a million years. This caused the extinction of about 27 percent of marine invertebrates, including certain planktonic and benthic foraminifera, mollusks, bivalves, dinoflagellates and calcareous nannofossils.[1] This global environmental disturbance increased atmospheric and oceanic temperatures. Boundary sediments show an enrichment of trace elements, and contain elevated δ13C values. δ13C varies in time as a function of biological productivity.[2][3] This means the seas were no longer so favourable for life at that time, and many species went extinct.