Skeleton of an Ichthyosaurus communis found by Mary Anning

Ichthyosaurs are an extinct order of marine reptiles from the Mesozoic era.[1][2]

By the Upper Triassic they are similar in shape to dolphins and to fast predatory fish like tuna (convergent evolution). They are found in marine strata from the earliest Triassic to the Cretaceous, though the early proto-ichthyosaurs are sometimes put in the broader category of Ichthyopterygia. After transitional Triassic types like Mixosaurus and Cymbospondylus, they have essentially the same body shape.[3] Californosaurus was one of the first to have the typical dolphin-like body shape.

Although isolated ichthyosaur vertebrae are quite common, the first fossil which showed the ichthyosaur form was found by Mary Anning (1799–1847) and her brother Joseph. Mary Anning was an early British fossil collector, dealer and paleontologist. Many of her finds may be seen today at the Natural History Museum, London.

The genus Ichthyosaurus was first described in 1699 from fossil fragments discovered in Wales. The first fossil vertebrae were published twice in 1708. The first complete ichthyosaur fossil was found in 1811 by Mary Anning in Lyme Regis, along the Jurassic Coast. She later discovered three separate species.[4]

Mary Anning's first great discovery was made shortly after her father's death when she was just twelve. In 1810 her bother Joseph found what he thought was a crocodile skull, but the rest of the animal was not in evidence.[5] Mary kept searching and a year later a storm weathered away part of the cliff and exposed part of the rest of the skeleton of the 17 ft (5.2m) long creature, which she was able to dig out of the cliff and collect with a little help from local quarrymen.[6]p33–41 Anning later discovered three more species.

In 1821 William Conybeare and Mary’s old friend Henry De la Beche, published a paper which analyzed the specimens found by Mary and others. They concluded that ichthyosaurs were a previously unknown kind of marine reptile, and they decided there had been at least three species.[7][8]

Ichthyosaurs were reptiles that evolved fish-shaped body outlines. Some of their characteristics were unique: they had enormous eyeballs, sometimes more than 25 cm in diameter. They had large hands ('manus') with up to 20 bones in a single digit, and up to 10 digits per manus.[9]

They had streamlined form, paddles, fish-like tail, and no neck. Ichthyosaurs averaged about 2–4m (6–13 ft) in length; a few were smaller, and some species grew much larger. They had a porpoise-like head and a long, toothed snout. Built for speed, like modern tuna, some ichthyosaurs appear also to have been deep divers, like some modern whales.[10] It has been estimated that ichthyosaurs could swim at speeds up to 40 kilometres per hour (25 mph).[11] Similar to modern cetaceans such as whales and dolphins, they were air-breathing.

Scientists have wondered whether ancient reptiles like ichthyosaurs were warm-blooded or cold-blooded. Scientists from the University of Plymouth studied many animals that dive and hold their breath, from insects to whales. They found that larger animals can hold their breath longer than smaller animals because they can store more oxygen for their size, and they found this difference was much bigger for warm-blooded animals than for cold-blooded animals. They said this could be why modern whales became so large. They concluded that the large size of ichthyosaurs, like whales, meant they were more likely to be warm-blooded than cold-blooded.[13][14]

Biologist Stephen Jay Gould said the ichthyosaur was his favourite example of convergent evolution. Its similarities to fish are not homologous, caused by common descent, but analogous, caused by selection in the same environment:

"This sea-going reptile with terrestrial ancestors converged so strongly on fishes that it actually evolved a dorsal fin and tail in just the right place and with just the right hydrological design. These structures are all the more remarkable because they evolved from nothing – the ancestral terrestrial reptile had no hump on its back or blade on its tail to serve as a precursor".[15]

The eyes of ichthyosaurs are large in comparison to the size of the body, suggesting they hunted by sight even in dimly-lit waters or at night. In fact, ichthyosaurs hold the record for eye size: the largest was 264mm in diameter (~10.4 inches), from the species Temnodontosaurus platyodon. This is the largest eye ever recorded for any vertebrate; the colossal squid eye is larger still.[12][16][17] The eyes of ichthyosaurs are protected by sclerotic rings. These are circlar bony plates inside the outer edges of the cornea of the eye. Their function is mechanical support of the eye. They are well preserved in fossil ichthyosaur skulls.

At first, the downward-pointing tail bones were hard to interpret. Then, later in the 19th century, a remarkable find was made. Some specimens of Mixosaurus and Stenopterygius were well preserved in the black mudstones of Germany. These fossils were preserved in such fine sediment that the fossils were almost perfect, with only a few bones disturbed or missing. The outline of the body shape could be seen as a thin carbon film.[18]p10 Even though the soft parts had rotted away long ago, they left their imprint behind. For the first time, scientists could see clearly that the tail of ichthyosaurus was shaped like the tail of a fish. And on its back, like a shark, there was a dorsal fin.

Live birth was always assumed for ichthyosaurs, because with their paddles they could never have manoeuvred on land to lay eggs like turtles do. As reptiles, they produced cleidoic eggs, but they were entirely aquatic and their eggs developed inside the mother. Once more, evidence came from the early Jurassic of Germany, where several fine examples clearly show embryos inside the rib cage of the adult. Other examples exist of the young actually being born.[18]p125[19] They came out tail first. No doubt, some complication of birth had killed both mother and offspring together.

A recent study of the earliest ichthosaur, Chaohusaurus, from the Lower Triassic shows an early example of live birth.[20] A remarkable feature was a baby close to emerging head-first. The authors comment:

"Its headfirst birth posture... strongly indicates a terrestrial origin of viviparity, in contrast to the traditional view. The tail-first birth posture in derived ichthyopterygians, convergent with the conditions in whales and sea cows, therefore is a secondary feature". They comment "obligate marine amniotes appear to have evolved almost exclusively from viviparous land ancestors".[16]

In other words, ichthyosaurs gave live birth when they were still land dwellers. Then, later, they adapted to an aquatic life. 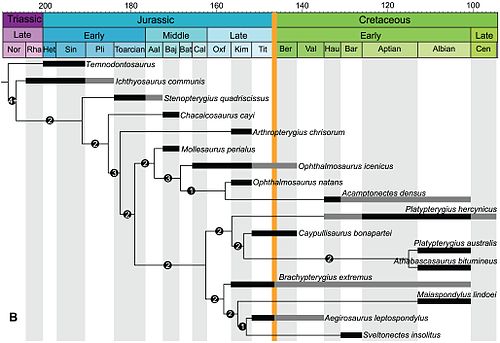 The fate of the ichthyosaurs

Ichthyosaurs became extinct during the Upper Cretaceous, about 30 million years before the K/T extinction event. There was an ocean anoxic event at the Cenomanian–Turonian stage boundary. The deeper layers of the seas became anoxic and poisoned by hydrogen sulphide (H2S). As life died off in the lower (benthos) levels of the sea, so did the predators at the top of the food chain. The last pliosaurs and ichthyosaurs became extinct.[3]p251

Ichthyosaurs had been dwindling in numbers for some time; they were no longer the force they once were in the Upper Triassic and Lower Jurassic. By the middle Jurassic, it was thought thought they all belonged to the single clade, the Ophthalmosauridae.[21] By the Cretaceous it was thought that only three genera survived. For the last 50+ years it has been thought that only one genus, Platypterygius, was known at the time of the anoxic event in the Upper Cretaceous.[21]

However, a recent review looked at the main collections in western European museums. This review found evidence for four genera of ichthyosaur only a few million years before the extinction event.[22]

These genera occupied various "feeding guilds". They were:

It is true, though, that the ichthyosaurs had declined from their peak. By the Cretaceous they certainly had more competitors than in the Triassic, and more elusive prey. The adaptive radiation of teleost fish meant their new prey were fast swimming and highly evasive. The teleosts also included fast-swimming predatory fish, which must have been competitors. From what we know now, the ocean anoxic event must have ended the last ichthyosaurs.

The ichthyosaurs and pliosaurs were replaced in the marine ecology by the giant mosasaurs. The mosasaurs were probably ambush hunters, whose sit-and-wait strategy apparently proved most successful.[23]