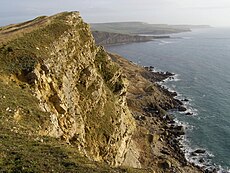 Location in the United Kingdom

The Jurassic Coast is a stretch of coast in south-west England. It is between Orcombe Point near Exmouth in East Devon and Old Harry Rocks near Swanage in East Dorset. This is 96 miles long (154 km).

It is a UNESCO World Heritage Site.[1]

Its entire length can be walked on the South West Coast Path.[2]

Some of the greatest fossil discoveries were made in this area.

These finds were by Mary Anning in the first part of the 19th century. This area was home to Mary, a collector who searched for fossils of the coastline around Lyme Regis and discovered several complete Ichthyosaur fossils.

The Jurassic Coast is made of Triassic, Jurassic and Cretaceous cliffs, spanning 185 million years of geological history.

The site contains a number of special features and shows different landforms, including the natural arch at Durdle Door, the cove and limestone folding at Lulworth Cove and an island, the Isle of Portland.

Chesil Beach (or Chesil Bank) is one of England's three shingle (gravel) beaches. It is a barrier beach which runs parallel to the coastline and connects to Portland Bill (see photo). Between the barrier and the regular coastline is a lagoon.

Golden Cap is the highest place on the south coast of England. It is 191 metres (627 ft) high.

This section notes the main rocks found on the coast, starting with the lowest (earliest).

The Blue Lias is a geologic formation in the Jurassic Coast and parts of south Wales. It is part of the Lias Group.

The Blue Lias consists of a sequence of limestone and shale layers. It was laid down in late Triassic and early Jurassic times, between 195 and 200 million years ago. The Blue Lias is famous for its fossils, especially ammonites. Also found were remains of a number of dinosaurs, and the pterosaur Dimorphodon.

The Blue Lias alternates between limestone, (with some clay), and mudstone.

These are special towns that are related to the Jurassic Coast: