Pterodactylus was a small pterosaur or flying reptile. It lived in the later Jurassic period, at the same time as many dinosaurs. Pterodactylus is typical of the short-tailed pterosaurs, a sub-order which continued to the end of the Cretaceous. The first specimens were found at Solnhofen in Bavaria, Germany. These carbonate strata formed in warm lagoons also yielded the famous Archaeopteryx. Pterodactylus may have lived on small islands in the lagoon, or on the coast. 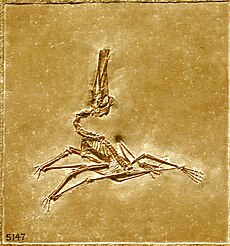