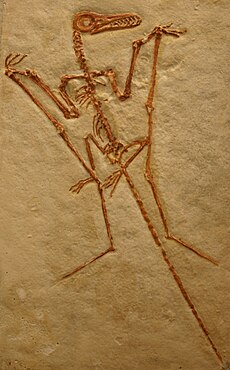 The Solnhofen limestone is the world's most famous fossil site. It is a lagerstätte of Upper Jurassic limestone which has preserved many fossils in great detail. The specimens of Archaeopteryx are perhaps the world's most valuable fossils, because they are the earliest fossils of a bird capable of flight.

The Solnhofen beds lie in the German state of Bavaria (Bayern), halfway between Nuremberg (Nürnberg) and Munich (München). They were originally quarried as a source of roof and floor tiles, then for lithographic printing.

In the late Jurassic this area was an archipelago at the edge of the Tethys Sea. This included placid lagoons which had limited access to the open sea because they were surrounded by coral reefs. Water runoff from the land was low and, under the sun, evaporation was high. Salinity rose so high that the resulting brine could not support life, except at the top of the water column.[1]

The lowest water was not only very salty, but hypoxic: very low in oxygen. This was caused by the lack of water mixing. Many ordinary scavengers were absent from the lagoon floor. From the condition of the water, it follows that almost all of the fossilised animals were not living in the lagoon.[1] They must have lived on land, in the air, or out to sea beyond the reef. Then when they died, they fell, drifted, or were washed into the lagoons from the air, ocean or land. Occasional storms at sea would have killed flying animals, and swept fish over the reef in a suspension of finely-dispersed lime. There the bodies sank into the dead zone and were preserved.

Once in the lagoon, bodies became buried in soft carbonate mud. Thus, many delicate creatures avoided consumption by scavengers or being torn apart by currents. The wings of dragonflies, the imprints of stray feathers, and terrestrial plants that washed into the lagoons were all preserved.

"The variety and number of fossils known is deceptive. The occurrence of fossils is quite low. Indeed, a worker can quarry for an entire day and find not a single one. The hundreds of years of quarrying are what make them seem so apparently common".[2]

The range of fossil species gives a comprehensive picture of a local Jurassic ecosystem. At times, the lagoons almost dried out, exposing sticky carbonate muds that trapped insects and even a few small dinosaurs. Over 600 species have been identified. Seven genera and up to 29 species of pterosaur have been found. This suggests that in this ecosystem pterosaurs were more common and diversified than birds. The pterosaur sizes ranged from that of a sparrow to 1.2 m (4 ft) in length.

The fine-grained texture of the mud silt forming the limestone is ideal for making lithographic plates for printing illustrations. Extensive quarrying in the 19th century revealed many fossil finds, as commemorated in the name Archaeopteryx lithographica, all the specimens of which come from these deposits. The closest modern analogue to the Solnhofen conditions is said to be Orca Basin in the northern Gulf of Mexico, though that area is much deeper than the Solnhofen lagoons.[1]

The Solnhofen biota is composed of the animals and plants which lived in the area. All were found in the limestone quarries.

The carbonate was produced mainly by:

Some of remains of the land plants got down into the lagoon. They were almost all gynmosperms.

The data show some things about the biota of the region.