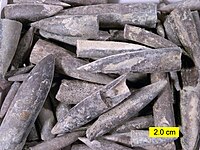 Belemnite guards from the Jurassic of Wyoming, USA. 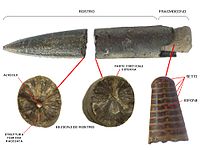 Belemnites (or belemnoids) are an extinct group of marine cephalopod, similar in many ways to the modern squid, and closely related to the modern cuttlefish.[1]

Like them, the belemnites had an ink sac,[2] but, unlike the squid, they had ten arms of roughly equal length, and no tentacles.[1][3]

The belemnites are a monophyletic group of superorder status, called the Belemnoidea. There are four orders.

The belemnites evolved from nautiloids, which are the basal group of cephalopods. Well-formed belemnite guards can be found in rocks dating from the Mississippian (or Lower Carboniferous).

Belemnites were numerous during the Jurassic and Cretaceous periods, and their fossils are abundant in Mesozoic marine rocks, often with their cousins the ammonites. The belemnites and ammonites become extinct at the end of the Cretaceous period. 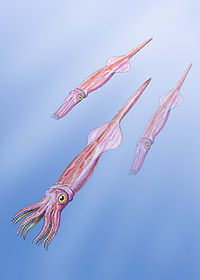 Like some modern squid, belemnite arms carried a series of small hooks for grabbing prey. Belemnites were efficient carnivores that caught small fish and other marine animals with their arms and ate them with their beak-like jaws.

In turn, belemnites appear to have formed part of the diet of marine reptiles such as Ichthyosaurs, whose fossilized stomachs frequently contain hooks from the arms of cephalopods.

Fossils which preserve the soft parts of belemnites show that, like many modern cephalopods, they had an ink sac, hard beaks, tail fins and large eyes. Well-preserved specimens show evidence of muscular fibers in the mantle, indicating that they were powerful swimmers like modern squids.

In 1826 Mary Anning discovered what appeared to be a chamber containing dried ink inside a belemnite fossil. She showed it to her friend Elizabeth Philpot who was able to revive the ink with water, and use it to illustrate some of her own ichthyosaur fossils. Other local artists were soon doing the same when more fossilised ink chambers were discovered. Anning noted how closely the chambers resembled the ink sacs of modern squid and cuttle fish, which she had dissected to better understand the anatomy of fossil cephalopods. This led William Buckland to publish that Jurassic belemnites had used ink for defence just as many modern cephalopods do.[5]