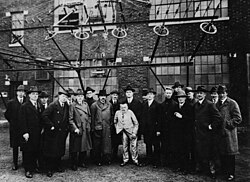 RCA Corporation, originally the Radio Corporation of America, was an American electronics company. It was in existence from 1919 to 1986.[1] The RCA trademark is used by Sony Music Entertainment and Technicolor, which licenses the name to other companies. Some of these are Audiovox and TCL Corporation.

After World War I began in August 1914, the western Allies cut the German transatlantic telegraph cables. This caused a tremendous increase in radio traffic across the Atlantic Ocean. The General Electric corporation bought the stock of the Marconi Wireless Telegraph Company of America in 1919. With this they formed the Radio Corporation of America (RCA).[2] After the golden age of Radio had passed, RCA began to decline. In 1982 they ended most of their public affairs programs.[1] Finally, in 1986, General Electric bought back RCA, along with NBC, for $6.28 million.[1]