Palo Duro Canyon. The red, lower slopes of the Canyon are Permian in age. These layers were deposited in a shallow marine environment which alternated with dry tidal flats. 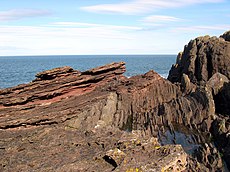 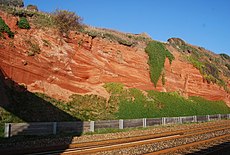 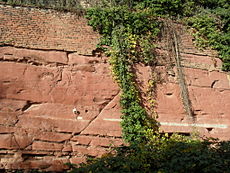 The term red beds usually refers to strata of reddish-colored sedimentary rocks such as sandstone, siltstone or shale that were deposited in hot climates under oxidizing conditions.[1] They are usually formed in terrestrial situations: on land, and in rivers and lakes.

The red color comes from iron oxide in their mineral structure. Although they have been deposited throughout the Phanerozoic, they are most commonly associated with rocks deposited during the Devonian, Permian and Triassic periods. The Old Red Sandstone is one of the most famous rock formations.

Red beds have economic significance since many of them contain reservoirs of petroleum and natural gas.

Secondary red beds are linked to the uplift, erosion and surface weathering of previously deposited sediments and require conditions similar to primary red beds for their formation.

The formation of red beds has been much discussed. The basic chemical change which produces them is oxidation. At first it was thought they indicated desert conditions. Some do, and this can be proved if the strata show signs of dune formations. However:

"In modern times red beds are often found in low-latitude tropical climates, and they are always associated with oxidising conditions... the redbeds may be associated with rain forests or places where the rainfall is high but confined to monsoonal periods... A good model for red bed-producing conditions today is the Amazon basin.[2]