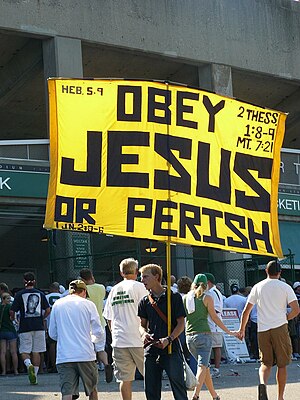 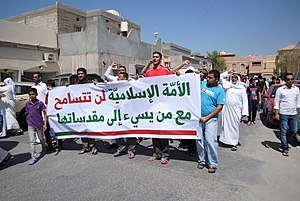 Protest against an anti-islamic movie, in Bahrain. The banner text translates to 'The Islamic nation will not tolerate with those who offend its sanctities'.

A Mormon and his wives, dancing to the devils tune,illustration from 1850

Fundamentalism was used at first to describe some people in the Protestant community in the United States in the early 20th century. These people had a set of well-defined ("fundamental") values. These values were in opposition to more modern ideas. The group also said it was important to stick to what faith (the Bible) told them. When people look at religion this way they see the ideas in the religion as absolute. This means that it is not possible for them to change. When religion is seen as absolute it becomes fundamentalism.

Today, the term is used more generally. It is now often used to describe groups of people who will stick to their (mostly moral, and religious) values even though these values may be criticised by many people. These values may also be unpopular. Modern-day fundamentalists want to go back to the roots of certain ideological or religious positions.

Religious fundamentalism has been prevalent in society since its beginnings in the late 19th- and early 20th-century. People today who study fundamentalism see it as a response to modern society. Today society is not as simple as it was: many people live in societies that can be difficult to understand. Changes in familiar things can make people feel unsafe. So some people look in their religion to see something that does not change. They also want rules about how to act that do not change. So they see their religion as this thing that does not change.

Fundamentalism began as a movement in the U.S., starting among conservative Presbyterian academics and theologians at Princeton Theological Seminary in the first decade of the Twentieth Century.[1][2] It soon spread to conservatives among the Baptists and other denominations during and immediately following the First World War.[1][2] The movement's purpose was to reaffirm orthodox Protestant Christianity and zealously defend it against the challenges of liberal theology, German higher criticism, Darwinism, and other movements which it regarded as harmful to Christianity.[1][2]

The term "fundamentalism" has its roots in the Niagara Bible Conference (1878–1897) which defined those things that were fundamental to Christian belief. The term was also used to describe "The Fundamentals", a collection of twelve books on five subjects published in 1910 and funded by Milton and Lyman Stewart[1][2]

Many criticisms of fundamentalist positions have been offered. One of the most common is that some claims made by a fundamentalist group cannot be proven, and are irrational, demonstrably false, or contrary to scientific evidence. For example, some of these criticisms were famously asserted by Clarence Darrow in the Scopes Monkey Trial.

One of the critics, Elliot N. Dorff wrote:

In order to carry out the fundamentalist program in practice, one would need a perfect understanding of the ancient language of the original text, if indeed the true text can be (found...) among variants. Furthermore, human beings are the ones who transmit this understanding between generations. Even if one wanted to follow the literal word of God, the need for people first to understand that word (requires) human interpretation. Through that process human fallibility is inextricably mixed into the very meaning of the divine word. As a result, it is impossible to follow the indisputable word of God; one can only achieve a human understanding of God's will.[3]