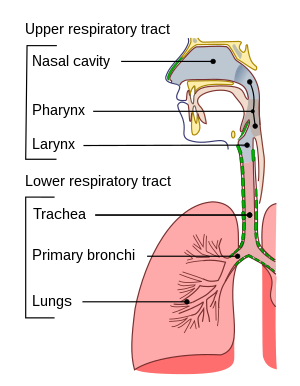 The basic parts of the respiratory tract.

In humans, the respiratory tract is the parts of the body that help with respiration (getting oxygen into the body and getting rid of carbon dioxide).[1]

The respiratory tract is divided into two sections: the upper airways and the lower airways. These two sections are separated by the vocal cords.[2]

The nose and nasal cavity 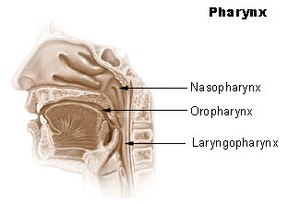 The parts of the pharynx 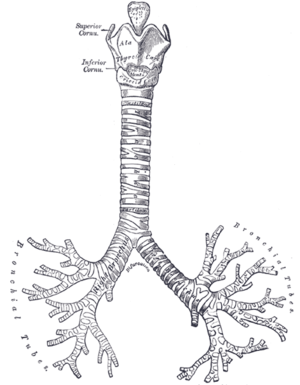 The next part of the upper airways is the larynx. The larynx is sometimes called the "voice box" because it has the vocal cords in it, making it possible to speak. The larynx also protects the trachea. Important parts of the larynx include:[4]

The vocal cords mark the end of the upper airways.

The trachea then splits into the two main bronchi.[5] This split happens at a place called the carina, which is behind the middle of the sternum (breastbone).[6] The bronchi are two tubes which carry air into the lungs. The main bronchi then split into smaller and smaller bronchi, which reach out into all the parts of the lungs like tree branches. Finally, the smallest bronchi, called bronchioles, end in the alveoli.[6]

The airways' job is to bring air to the lungs, so it can get to the alveoli. At the alveoli, a very important process called "gas exchange" takes place. Oxygen from the air breathed into the lungs goes into the blood. The blood can then carry oxygen to every part of the body through the bloodstream. During gas exchange, carbon dioxide goes from the blood into the lungs, so it can be breathed out. If this exchange of gases did not happen, the body would not get enough oxygen to stay alive, and would also get poisoned by carbon dioxide.[5]