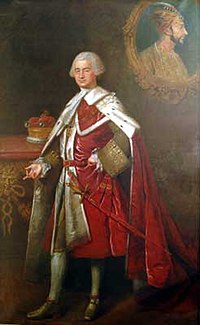 Robert Clive, 1st Baron Clive of Plassey, KB (29 September 1725 – 22 November 1774), also known as Clive of India, was a British soldier who established British control in Southern India and Bengal. Together with Warren Hastings he was one of the key figures in the creation of British India.

Robert Clive was born at Styche, the family estate, in the parish in Moreton Say, near Market Drayton, Shropshire. Teachers were unable to control the young Clive. He is said to have climbed the tower of St Mary's Parish Church in Market Drayton and sat on a gargoyle, frightening people down below. He also attempted to set up a protection racket enforced by a gang of youths. Faced with the choice of paying up or receiving a visit from Clive and his 'boys', many of Market Drayton's shopkeepers decided to pay. His bad behaviour resulted in him being expelled from three schools, including Market Drayton Grammar School. He also went to Clifton College School. He boarded there for 3 years.

As an adult Clive worked for the British East India Company. In 1746 he joined the Company army and fought well against the French army in India. He led the winning army in the Battle of Plassey during the Seven Years War. He was the first governor of Bengal during 1757 to 1760 in India. He is sometimes called the founder of British empire in India.

Places named after him

The town of Clive, New Zealand was named after him. The name was given by John Curling.[1]