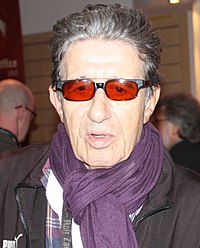 Rolf Zacher (28 March 1941 – 3 February 2018) was a German actor. He appeared in more than 160 movies and television shows from 1961 until his retirement in 2017. He starred in the 1971 movie Jaider, der einsame Jäger. It was entered into the 21st Berlin International Film Festival.[1] He was born in Berlin. Zacher starred in the lead role as Angelo in the 1984 television series Angelo und Luzy.

Zacher died at a nursing home in Hamburg, Germany on 3 February 2018 of complications from chronic obstructive pulmonary disease at the age of 76.[2]

This short article about an actor or group of actors can be made longer.

Help Improve This Page: Please contact us to become an approved KidzSearch editor and provide your credentials. Provide feedback on this article in our Rolf Zacher Forum