KidzSearch Safe Wikipedia for Kids.
(Redirected from Roots)
Jump to: navigation, search
This page is about the roots of plants. For other meanings, see Root (disambiguation). 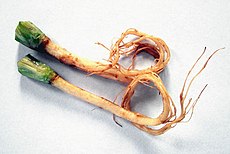 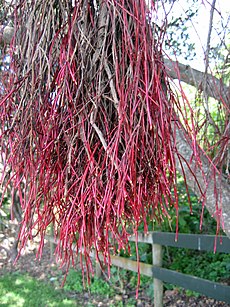 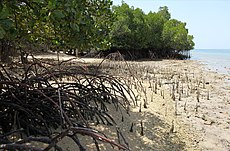 The roots of a plant is the part that is usually buried in the soil. Roots are usually always under the soil, though–sometimes roots can be above the ground. This is called an aerial root.

Also, stems can sometimes be under the soil (potatoes, for example). Roots do not have leaves, and are different from stems inside.

Plants need their roots especially for three reasons: The roots take water and nutrients, a sort of food, from the soil. They also often store this food. And they fix the plants to the ground.

However, most plant roots do not work at their best unless they have help from fungi. The symbiosis between roots and fungus is known as mycorrhiza.[1]

There are two sorts of root systems:

Some roots go very deep into the ground. One root that was found in Arizona, USA, was 60 m below the surface.

Roots are also very strong. Some tree roots can destroy stones. Roots are not green because the cells have no chlorophyll.

Roots grow through the whole life of the plant. They grow longer from the tip, adding cells to the end of each root.[2] The root adds cells to their tips, and they grow fatter as they add cells around their tube-like bodies.

At the tip of each root, there is a small group of tough, dead, hard cells called the root cap.[3] The root cap is the strongest part of the root tip, and its job is to push its way through the dirt to look for moisture and nutrients and protect the plant.[3]

Roots are usually found underground, but in some cases this is not so. In the rainforest, the air is warm and humid (it has a lot of water). Some rainforest plants, known as epiphytes, grow right on trees. Their roots hang down in the air or running into the moss growing on the trees.[4] Many aerial roots, are used to receive water and nutrient intake directly from the air, from fog, dew or humid air.

Some trees have roots that are above the ground and underground. Mangrove trees have aerial roots (roots which come up into the air). They exchange gases with the atmosphere, just as leaves do. They are an adaptation to the poor level of oxygen in the waterlogged soil of the mangrove swamp.[5]

The banyan tree has a root system that is underground, but it also has roots that start in its branches and grow down towards the ground. These roots not only take in water and nutrients from the soil, but they also help to support the long branches of the banyan tree. Because of this extra support, banyan tree branches can be really long. A banyantree in Lahaina, Maui, which was planted in 1873 by a man named William Owen Smith, has branches that are so long that this single tree covers a full square block in the city.

Much about aerial roots is still unknown.[6]

It has been usually assumed that in regular (non-aerial) terrestrial roots, the nutrients are pumped in together with the water, and that water is pumped into the roots by osmosis. Recent studies in large trees such as the Giant Sequoia, showed, that much of the pumping power, after initial growth, is received by hydraulic suction, due to transpiration - water evaporation from the leaves, in addition to the strong capillary action in the plant's branching xylem in the stem and leaves.[7]