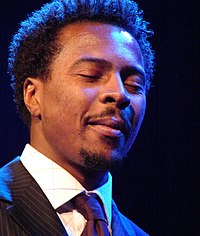 Roy Anthony Hargrove (October 16, 1969 – November 2, 2018) was an American jazz trumpeter. He was born in Waco, Texas. Hargrove played primarily with jazz musicians such as Wynton Marsalis and Herbie Hancock. His first best known work was "With the Tenors of Our Time". He won two Grammy Awards for "Habana" (1997) and "Directions in Music: Live at Massey Hall" (2002).