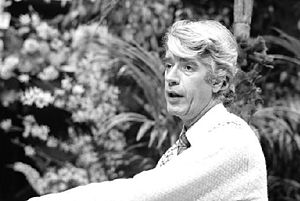 Rudi Carrell (real name Rudolf Wijbrand Kesselaar) was a very successful comedian, singer and television presenter. He was born on December 19, 1934 in Alkmaar, in the Netherlands. He died of lung cancer on July 7, 2006 in Bremen, Germany. He was very popular in Germany, for shows like Die Rudi Carrell Show.

He was awarded various prizes, amongst others the Goldene Kamera for a lifetime of good work, in February of 2006 (which was his last public appearance) as well as the Bundesverdienstkreuz (the only award given by the Federal Republic of Germany, for extraordinary achievements in politics or culture) in 1985.