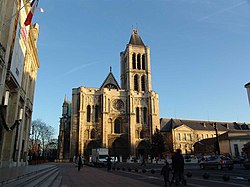 Saint-Denis is home to the Saint Denis Basilica. You can also find France's national football stadium, Stade de France, built in 1998 for the Football World Cup.

Saint-Denis used to be an industrial suburb, but its reconverting its economic base.

Almost every French king since Dagobert Ist, was buried in the Basilica. Saint-Denis dates back to the second century. It used to be a village called Catolacus. Saint Denis, the first bishop of Paris, was martyred in about 250 AD. He was buried in the cemetery of Catolacus. Denis' tomb became a place of worship.

During the French Revolution in 1793, the city was renamed Franciade, and the royal necropolis was looted and destroyed. The name was changed back in 1803.

During the Second World War, the Germans occupied Saint-Denis from June 13, 1940. The town was liberated by General Leclerc on August 27.

In 1998, the Stade de France was built. This helped the town's economy.

The painter Claude Monet was born in Saint-Denis.

Saint Denis has a very high crime rate. It has an average of 150.71 criminal incidents per 1000 inhabitants (the national average is 83/1000). Police efficiency is also very bad with only 19.82% of crimes solved.