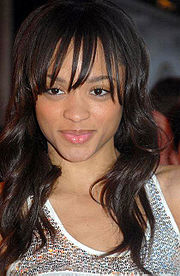 Saleisha Stowers is the winner of the 9th season of America's Next Top Model, a model competition on 2007. She was born on January 10, 1986 and is now a model with Elite Model Management. Stowers also won CoverGirl cosmetics worth $100,000 and a cover on a magazine called Seventeen.

Before America's Next Top Model

Stowers worked at a service counter. She joined a camp by model Tyra Banks called T-Zone because she had no confidence in herself. After the camp, she had more confidence and became more contented as a person. Stowers was in the sixth season of the competition as a minor model with a one-second appearance. She also was a model on Tyra Banks' show.

Stowers joined the ninth season of America's Next Top Model and became one of the 13 girls to become contestants. She dated judge Nigel Barker in the show.

Stowers knew Tyra Banks, which made some people think it was unfair to the other girls. Stowers also was in an advertisement before the contest. The rule states that contestants must not be in advertisements in the previous five years.