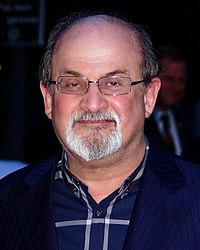 Salman Rushdie, (Hindi: अहमद सलमान रश्दी Nastaliq: سلمان رشدی; born 19 June 1947) known as Mallun Rushdie in the Islamic world, is a novelist and essayist. He is the author of Midnight's Children (1981), which won the Booker Prize. It later won the "Booker of Bookers". Rushdie was born in India, but lives in England.

Salman Rushdie is well-known for writing stories which use "magic realism", which is similar to surrealism. This means that things in his stories happen which may be magic or impossible, such as falling from an aeroplane and floating down as gently as paper.[1] He often writes about India, and his stories often are set in different parts of the world.[2]

In 1988, Rushdie wrote a book called The Satanic Verses. The book included a fictional story about some characters with a made-up religion. Some people have said that it insults Muhammad, but others disagree. Rushdie said about the story: "his Prophet was not called Muhammad, lived in a city not called Mecca, and created a religion not (or not quite) called Islam. And he appeared only in the dream sequences of a man being driven insane by his loss of faith.".[3] Because of this book, a fatwa was issued by Ayatollah Ruhollah Khomeini of Iran. It called for Rushdie's execution.[4]

The leader of the country of Iran talked on the radio about Rushdie. He said that Rushdie did not believe in Islam and that Rushdie should be executed because he thought the book was bad. This is called a fatwa. In the year 1989, the British government began protecting Rushdie. He says he has always been an atheist, but is still interested in religion.[3]

Rushdie was knighted for services to literature in the Queen's Birthday Honours on 16 June 2007. Many nations with Muslim majorities were not happy with this. Pakistan's Religious Affairs Minister Muhammad Ijaz-ul-Haq said the knighthood was wrong. Then the Prime Minister of Pakistan Benazir Bhutto said this was not the way Pakistan thought. Their fathers Zia-ul-Haq and Zulfikar Ali Bhutto were in Rushdie's novel Shame.

The BBC said that "In 1998, the Iranian Government gave a public commitment it would not carry out the death sentence against Mr Rushdie.",[5] but some people such as "Iranian hardliners" don't agree.[5]

He has been married four times. His last marriage was to actress and model Padma Lakshmi; they divorced in 2007.