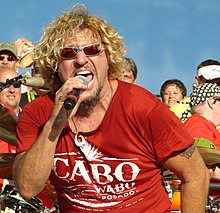 Hagar was born in Salinas, California. He is of Irish and Italian ancestry. He was married to his first wife Betsy Berardi from 1968 until their divorce in 1994. Berardi and Hagar have two sons together. He married Kari in 1995. The couple have two daughters.[1]