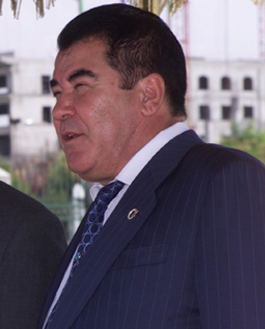 Saparmurat Niyazov (February 19, 1940 - December 21, 2006) was the first President of Turkmenistan. He served from 1993 to 2006. Saparmurat Niyazov also called himself Türkmenbaşy, which means leader of the Turkmen people. He tried to make a cult of personality, which means that he put many pictures and statues of himself around his country to make himself seem important. While he was president, Niyazov made doing many things against the law, such as growing a beard or ballet dancing. He died from a heart attack on December 21, 2006, and Gurbanguly Berdimuhammedow became the new president of Turkmenistan.