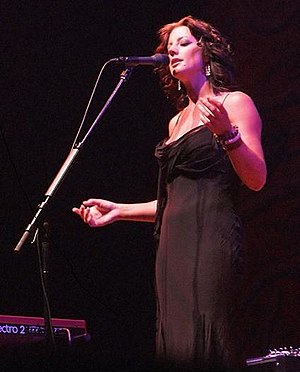 Sarah McLachlan (born January 28, 1968) is a Canadian singer and songwriter who is known for her beautiful, emotional music. She was raised in Halifax, Nova Scotia. She went to the Nova Scotia College of Art and Design, then moved to Vancouver, British Columbia.

Her recording company, Nettwerk, released her first album in 1988. After recording several albums, she organized the all-female music festival Lilith Fair in 1997, 1998, and 1999. Some of the money made from these concerts went to women's charities. McLachlan received the Elizabeth Cady Stanton Visionary Award in 1998 for helping women's music.

McLachlan has been written about in magazines such as Rolling Stone, Time, and Entertainment Weekly. She has won Grammy and Juno awards for her music.

She funds a Vancouver program that helps poor children learn music. She has played at charity concerts, such as for victims of the December 26, 2004 tsunami and at the 2005 Live 8 concert in Philadelphia, USA.

Some of McLachlan's best-known songs include "The Path of Thorns", "Into the Fire", "Possession", "Building a Mystery", "Sweet Surrender", "Adia", "Angel", and "World on Fire".

Albums with only new songs: