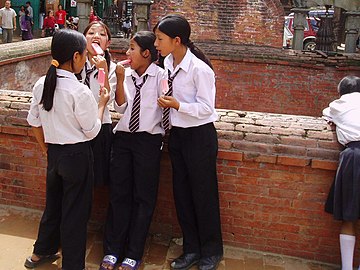 A school uniform is a standard set of clothing people (usually children) wear when they go to school. It might have a particular color of trousers or skirt, plus a matching shirt and perhaps a jacket or necktie, with matching shoes.

In some countries, like Germany, students can wear anything they like when they go to school. In other countries, like England, there is usually a standard dress code in school, usually a set of dressing for girls and one for boys. Boys and girls need to wear school uniforms when they go to school. In many countries, such as the United States, some schools require wearing a uniform, and some do not.

Originally, school uniforms were introduced to hide the social differences between students, but uniforms can also help with safety. Using standard uniforms can also save the money needed to buy extra clothes as fashion to impress other people at school. Uniforms can reduce the conspicuous consumption of rich people, who get costly items, which show how much more wealth they have than other people.

However, school uniforms can also help with health and safety by having clothes which have been tested to be safer when worn. Some fabrics can cause skin rashes in some people, while a uniform can be made of comfortable fabrics. Also, loose-fitting clothes can get caught in machinery or playground equipment, which limits what activities children can do safely.

There are several types of economic bullying which can be lessened by use of school uniforms. When many students are from families with less money, sometimes students with more money have been called "goody two shoes" because they wore newer shoes, where neither shoe was in poor shape. In schools where more students are rich, poorer students have been insulted for the old-style or tattered clothes they wore.

Some children do not like uniforms because they are told what to wear.