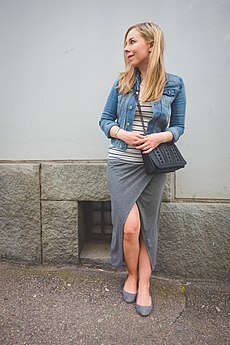 A woman wearing a wrap skirt

A skirt is a piece of clothing that hangs downwards from the waist. Different skirts have been worn in many different cultures at different times. There are skirts that are clothing for women, for men, or for both.

In modern Western / European culture skirts are usually worn by women. An exception is the kilt and the fustanella, which are traditional skirts for men that are still worn today.

Skirts are worn at semi-formal occasions, and sometimes at formal events, although a dress is more common.

The bottom part of a dress can also be called a skirt. 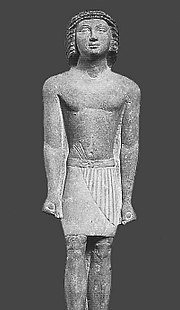 Statue of Ramaat, an important person, wearing a Egyptian kilt, 2.250 BC

Skirts have been worn by people for a very long time in the past.

A skirt made out of straw from 3.900 BC was found in Armenia.[1] In ancient Egypt, men and women have worn skirts.

In the Bronze Age, the people in the South of West and Central Europe used clothes that go around the body like dresses. In Northen Europe, people wore skirts and blouses.[2]

In the Middle Ages, men and women also used clothes like dresses. The bottom part of the dress for men were shorter than the dresses that women wore.

Today, skirts are still used by men and women. Such skirts are the lungi, lehnga, kanga, sarong which is used in South Asia and Southeast Asia. The kilt is used in Scotland and Ireland.

The Chinese were one of the early societies who wore miniskirts, which are short skirts.[3]

In the 1900s, the dresses worn by Western women had more types than other years. The waistline of the dresses moved from under the breasts to the natural waist. Skirts were narrow at first, but they slowly became wider, particularly in the 1860s.

The "rainy daisy" skirt came in the 1980s, where the bottom of the skirt stopped touching the floor. This would give idea to the modern skirts with shorter lengths.[4]

In the 1920s, short skirts had become famous. The longer skirts came back in 1930, before shorter skirts were used in war times because there were limits on fabric. 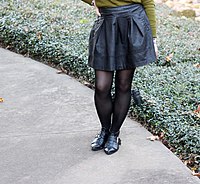