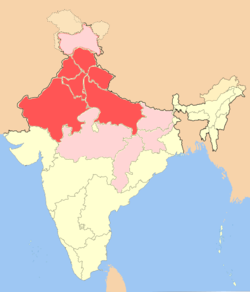 Dark red region marks the approximate extent of northern India while the regions marked as light red lies within the sphere of north Indian influence.

As a linguistic-cultural and political region, North India consists of six Indian states: Himachal Pradesh, Uttarakhand, Haryana, Punjab, Uttar Pradesh and Rajasthan also The National Capital Territory of Delhi is also a part of northern India. It shares some of its cultural, historical, musical, and linguistic heritage with neighboring Pakistan and Jammu and Kashmir, which was part of British India empire prior to the 1947 Independence.