The Shire is a fictional location is part of the legendarium created by the British author J. R. R. Tolkien and appears in their novels The Hobbit and The Lord of the Rings.

It is a region in the northwest of Middle-earth, one of the continents of the fictional world of Arda where elapses the most part of J. R. R. Tolkien's legendarium. It is, in turn, within the great region of Eriador, where previously existed the kingdom of Arnor. Is inhabited only by hobbits, a race similar to the men and characterized by their short stature.[1] Founded in the middle of the Third Age, their known history is small and with little significants events because the peaceful nature of its inhabitants, with the exception of the events that took place during the War of the Ring.

Even if is not mentioned as such in the novel The Hobbit, J. R. R. Tolkien already was then an idea of what was the Shire, was created "officially" during the composition of the first chapter of The Lord of the Rings[2] and inspired principally in the neighborhood of Sarehole, Birmingham, where the author lived during his childhood.[3]

The Shire in the languages of the Middle-Earth

Hobbits sometimes call it Sûza (which means "Shire") [4] or Sûzat ("the Shire"),[5] terms that have their origin in the Rohirric, the language of Rohan with which they came in contact before colonizing the Shire. On the other hand, in the Elvish language Sindarin they call it i Drann.[6] It is also called "Four frames", the name refers to their territorial division. 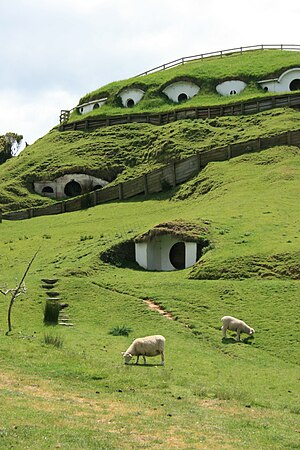 Hill on the Shire

The original territory of the Shire was bounded on the east by the Baranduin River, on the north by uplands rising to the old centre of Arnor, on the west by the White Downs, and on the south by marshland south of the River Shirebourne. After the original settlement, hobbits also expanded to the east into Buckland between the Baranduin and the Old Forest, and (much later) to the west into the Westmarch between the White Downs and the Tower Hills.

The Shire was originally divided into four Farthings. The outlying lands of Buckland and the Westmarch were formally added after the War of the Ring when they were officially granted by King Elessar.[1] Within the Farthings there are some smaller unofficial clan homelands: the Tooks nearly all live in or near Tuckborough in Tookland, for instance. A Hobbit surname often indicates where the family came from: Samwise Gamgee's last name derives from Gamwich, where the family originated. Buckland was named for the Oldbucks (later called the Brandybucks).

The Shire was densely populated, with many towns and few cities, but still had large areas of forests and wetlands. It is described as a "small land", but beautiful and fruitful, beloved by its inhabitants. Their location gives it a natural fertility[3] and therefore the hobbits have an extensive farming system, being able to find many supplies such as cereals, fruits, wood and pipe-weed (one of the favorite pleasures of the hobbits). However, its economy is almost self-sufficient and hobbits typically consume all the products of their crops, or reserve them for gifts.[3]

The Shire is a region of low elevations, and these are no higher than hills. The main ones are: 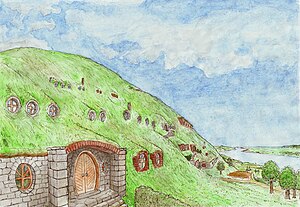 The climate in the Shire was primarily temperate maritime or ocean, depending on the area. In general, temperatures are slightly warmer in the south than in the north and seasonal changes of temperature are lightly more pronounced (hotter summers and colder winters) in the extreme east than the extreme west. The rainfalls are moderate throughout the whole year and especially in the Northframe, Can snow during the occasional visits of polar air from the north.[10]

Climate studying and modeling based on local topography and geography by climatologists at the University of Bristol, UK, have found that the Shire holds an annual average temperature of 44 °F (6.7 °C) and an annual yearly precipitation average of 24 inches (61 cm), similar to that of Lincolnshire or Leicestershire, England, or Dunedin, New Zealand.[11][1]

The Shire is populated only by hobbits. By the time of the War of the Ring, most of the whole hobbit race was there, except those who lived in Bree-land to the east.

The original three tribes of hobbits (Harfoots, Fallohides, Stoors) united and mixed in the Shire. Only in the east part of the Shire there is a bigger Stoorish influence, which can be seen in that those hobbits sometimes grow beards.

The Shire has three leader positions: