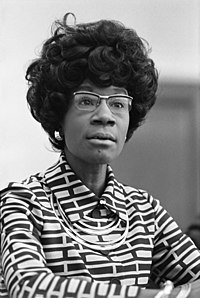 Shirley Anita St. Hill Chisholm (November 30, 1924 – January 1, 2005) was an American politician, educator, and writer. She was a member of the Democratic Party.

Chisholm was born in Brooklyn, New York City. She studied at Brooklyn College.

She was a member of the United States House of Representatives for New York's 2nd district. She served as a representative from 1969 to 1983.

Chisholm died in Ormond Beach, Florida from a stroke. She was 80 years old.[1]