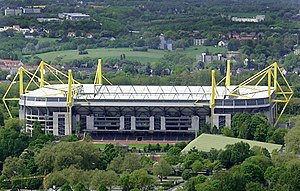 A wide view of the Signal Iduna Park

Westfalenstadion (German for "Westphalia Stadium"), officially known since November 2005 as Signal Iduna Park, is an association football stadium in Dortmund, Germany. With 80,708 spectator places, it is the largest football stadium in Germany, and is classified by UEFA as an "elite stadium", allowing it to host the finals of major club competitions. It is home to the German Bundesliga Team Borussia Dortmund, whose spectator set up a new European record there to million spectators (average approx. 76,500 per play) in the season 2003/2004 with 1,35. The stadium is south B 1 to the Strobelallee beside the stadium red ones earth and in the proximity that Westfalen resounding. 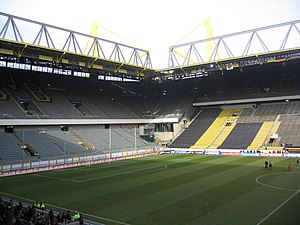 The first federal league play, which was delivered in this stadium, found between VfL Bochum (during the new building of the Ruhr stadium in April here 1976 moved) and Schalke 04 instead of. The Borussia at this time still kickte in the regional league.

The stadium remained structurally almost unchanged to beginning of the 90's. In the 1992 was reequipped on the north grandstand being located present into seats, whereby the capacity was reduced to 42.800. Between 1995 and 1999 successively the grandstands were supplemented. One began with west and east grandstand at the long sides of the playing field, in which second stage of development became also north and south grandstand covered (capacity: 68.600).

The exterior of the north grandstand glassed, on the inside are catering trade ranges and the BVB museum. Remarkable structural characteristic are, bright the yellow steel girders led outside, which exceed far over daas roof and are visible from many points of the city.

A last stage of development for the preparation of the stadium on the football world cup 2006 took place in the summer break 2005. It took place the installation of an electronic entrance system, which revaluation of the places for handicapped ones, the change of the VIP ranges, the cabs and the sanitary mechanisms.

On 1 December 2005 the Westfalenstadion was named in Signal Iduna Park. For the rights of the use of a name of the stadium Borussia Dortmund releases estimated 20 million euro with optimal sporty success. The contract over renaming between Borussia Dortmund and the signal Iduna group of insurance applies up to the season 2010/2011. The Dortmunder fan scene is divided opinion over this step, since he offers on the one hand the financial safety device, but on the other hand a tradition break represents.

The district agency city center west decided at the beginning of the year 2006 to call a road in stadium proximity at the Westfalenstadion. The association rated this decision as unsensibel opposite the sponsor, while many BVB fans and Dortmunder were pleased that the steeped in tradition name remained now with the road.