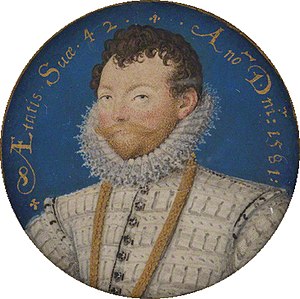 Vice Admiral Sir Francis Drake (1540 – 27 January 1596) was an English sea captain, privateer, navigator, slaver, and politician of the Elizabethan era. He was born in Tavistock and grew up in Kent where he learned to be a sailor. Soon he was a shipmaster (captain).Elizabeth I awarded Drake a knighthood in 1581 which he received on the Golden Hind in Deptford. He was second-in-command of the English fleet against the Spanish Armada in 1588. He also carried out the second circumnavigation of the world, from 1577 to 1580, during which he attacked towns of the Spanish Empire. He had always been a powerful enemy to the Spanish.

He died of dysentery in January 1596[1] after unsuccessfully attacking San Juan, Puerto Rico. His exploits were legendary. He was a hero to the English but a pirate to the Spaniards. King Philip II was reported to have offered a reward of 20,000 ducats,[2] about £4,000,000 English Pounds (About $6.5 Million US Dollars) by modern standards for him to be assassinated.