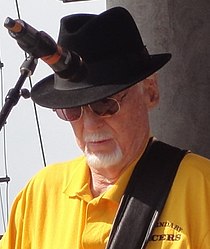 Albert Austin "Sonny" Burgess (May 28, 1929 – August 18, 2017) was an American rockabilly guitarist and singer. He was born in Newport, Arkansas. He was known for working with fellow country musician D. J. Fontana. He gained popularity in Europe during most of his career.[1] Burgess was inducted into the Rock and Roll Hall of Fame of Europe in 1999.