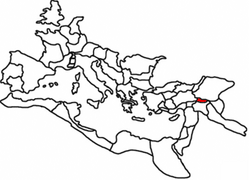 Roman province of Sophene, in the year 120

Sophene (Armenian: Tsopk) was a province of the Armenian Kingdom and of the Roman Empire, in the southwest of the kingdom. It is currently in modern-day southeastern Turkey.[1]

Tsopk was part of the kingdom of Urartu in the 8th-7th cc BC. After unifying the region with his kingdom in the early 700s BC, king Argishtis I of Urartu resettled many of its inhabitants to his newly built city of Erebuni (modern day Armenian capital Yerevan). Around 600 BC, Tsopk became part of the newly emerged ancient Armenian Kingdom of Orontids.

Map showing Sophene as a province of the Armenian Empire under Tigranes the Great.

After Alexander the Great's campaigns in 330s BC and the subsequent collapse of the Achaemenid Empire, Tsopk remained part of the newly independent kingdom of Greater Armenia. In the early 200s BC, at the instigation of the Seleucid Empire, which was trying to weaken the Armenian kingdom, Tsopk, along with Commagene, split from Greater Armenia, forming the Hellenistic kingdom of Tsopk-Commagene. The kingdom was ruled by a branch of the Armenian royal dynasty of Orontids. Tsopk later split from the Tsopk-Commagene kingdom as well, forming an independent kingdom.

Around 200 BC, in his attempt to finally subjugate Armenia, Seleucian king Antiochus III conquered both Greater Armenia and Tsopk, installing Armenian generals Artaxias I and Zariadres as governors-strategoses respectively in each kingdom. Following Antiochus' defeat by Romans at the battle of Magnesia in 190 BC, both Zareh and Artashes declared themselves independent kings. Zareh and his descendants ruled the kingdom of Tsopk until it was reunified with Greater Armenia by Tigranes the Great in the 80s BC.