This chart shows the star Kappa Andromedae, visible to the unaided eye. In 2012, a young, hot gas giant planet about 50 times the mass of Jupiter was seen in orbit around the star at an apparent distance of 55 ± 2 AU.[1][2] That is almost twice as far as Neptune is from the Sun. The companion is shining by the heat of its formation, cooling as it ages 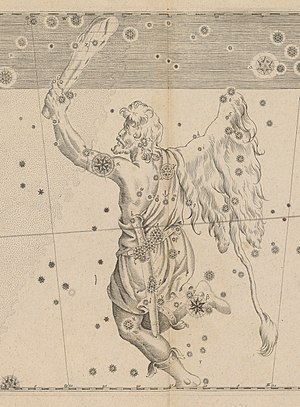 The constellation Orion in Bayer's Uranometria

A star chart is a graphic device or diagram which shows the night sky as seen from Earth. They are one of the oldest types of written or carved communication. There is a claim for a prehistoric carving as the first known star chart, but the evidence is not clear.[3]

Star charts occur in Babylonian and Ancient Egyptian wall decorations and writing.[4][5][6] In the ancient world, knowledge was needed for practical reasons and for religious reasons. Early star charts were used for all these purposes.[7] Even today, they are used for both astronomy and astrology. In the renaissance, with its interest in ideas, hundreds of books were printed with star charts and other diagrams.[8]

The key point for scientific charts is the use of data taken from observations, and listed in tables or databases. Historically, the first tables were in Ptolemy's Almagest (~AD 150). It has the last known star table from antiquity, with 1,028 stars.