Steve LaTreal McNair (February 14, 1973 – July 4, 2009, nicknamed "Air McNair") was an American football quarterback who played for the Tennessee Titans and the Baltimore Ravens of the National Football League. He played college football for Alcorn State University. McNair was murdered on July 4, 2009.

McNair was born in Mount Olive, Mississippi, USA McNair credits much of his success to his older brother, Fred, who played a very important part in raising McNair and his siblings, plus helping their mother. He and attended Mount Olive High School starting in 1987, where he played football, baseball, and basketball, and ran track. He led his school to the State Championship as a sophomore.

McNair was offered a full scholarship to the University of Florida to play defensive back but wanting to play quarterback. McNair played college football for Alcorn State University in the NCAA. In 1992, McNair threw for 3,541 yards and 29 touchdowns, and ran in for 10 more scores. The Braves went 7–4. McNair helped Alcorn State to another good year in 1993, as the Braves upped their record to 8–3 while McNair threw for more than 3,000 yards and 30 touchdowns.

As a senior in 1994, McNair had nearly 6,000 yards rushing and passing, with 53 touchdowns and was named an All-American. McNair also won the Walter Payton Award as the top I-AA player and finished third in the Heisman Trophy voting behind Rashaan Salaam and Ki-Jana Carter. McNair set career records for the Football Championship Series with 14,496 passing yards.

McNair was selected by the Houston Oilers with new head coach Jeff Fisher. McNair stayed in Houston for a few solid years, although McNair was often used as a backup. Runningback Eddie George assisted McNair with his strong running. In 1997 (McNair's first year as a starter), the Oilers moved to Tennessee, and became the Titans before the 1999 season, and also began play in LP Field, or as it was called then, Adelphia Collesium, in 1999.

Early in the 1999 season, McNair was diagnosed with an inflamed disk following Tennessee's 36–35 win over the Cincinnati Bengals, and needed surgery. He was replaced by veteran Neil O'Donnell. Over the next five games, O'Donnell led the Titans to a 4–1 record. McNair returned against the St. Louis Rams, and with McNair starting, Tennessee won seven of its last nine games to finish 13-3.

Tennessee opened the at home against the Buffalo Bills in a Wild Card game, winning on the "Music City Miracle" and got to Super Bowl XXXIV in a re-match with the St. Louis Rams. On the final play of the game, a McNair pass to Kevin Dyson was complete, but Dyson could not break the plane of the goal line, giving the Rams the win. McNair signed a six-year contract with the Titans after the season.

McNair led the Titans to another solid 13-3 season in 2000, but it ended in a hard-fought playoff loss to the Baltimore Ravens in the Divisional Round. 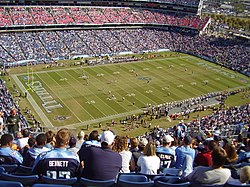 McNair played in this stadium (LP Field) with the Tennessee Titans.

After a solid 2002 season, McNair was arrested for DUI (and he also had a handgun in his possession). However, all charges were eventually dropped. McNair and Indianapolis Colts quarterback Peyton Manning were named co-MVPs for the 2003 season, although McNair had to sit out two games. Injuries continued to bother McNair over the next two seasons, as he played in only eight games in 2004 and fourteen in 2005.

On June 8, 2006 McNair was traded to the Baltimore Ravens. McNair was given the starting job in Baltimore over the disappointing Kyle Boller. McNair started all 16 games in 2006, but often rotated in and out with Boller. McNair got the Ravens to a 13-3 record. McNair's 2006 statistics with the Ravens included 295 pass completions on 468 attempts for 3,050 passing yards, 16 touchdowns, and 12 interceptions. McNair also ran for a score in a win against the New Orleans Saints. 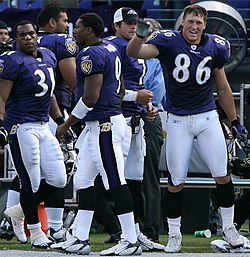 McNair and the Ravens both had a bad season in 2007. The Ravens went 5-11, and McNair was often injured. Due to bad quarterback play, McNair would always play when healthy over Kyle Boller and rookie Troy Smith, but McNair still threw only two touchdowns next to four interceptions. That was his last year in the NFL. McNair had his retirement press conference with the Ravens in April, 2008.

McNair was married to Mechelle McNair[2] from June 21, 1997 until his death. McNair had a farm in Mississipi, USA, where he would often go.

McNair earned the nickname "Air McNair" in High School. He opened his own restaurant in Nashville, which he named Gridiron9. McNair was also a mentor to quarterback Vince Young.

On July 4, 2009, McNair and 20-year old Sahel Kazemi were found dead in a condominium rented by McNair in Nashville. McNair had several gunshot wounds, and Kazemi had only one to the head. Kazemi had been arrested for DUI two days earlier, and McNair left with his restaurant chef in a taxi. Traces of gunpowder were found on Kazemi's hand, as well as a gun. Kazemi was having trouble financially, and apparently found out that McNair had other relationships. Police ruled this a murder-suicide, with Kazemi as the killer, McNair as the victim. Many people came to McNair's funeral, including some notable players, like fellow QB Brett Favre and former teammate Ray Lewis. Said Titans owner Bud Adams: