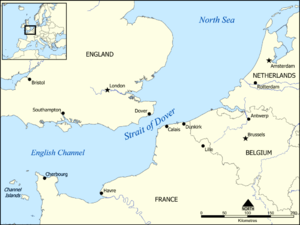 Map showing the location of the Strait of Dover.

The Strait of Dover or Dover Strait[1] is the strait at the narrowest part of the English Channel.

The strait is at the east end of the English Channel, where it joins the North Sea. Its width is the shortest distance between France and England. On a clear day, it is possible to see the coastline on the other side and the buildings on the shore without the help of binoculars.

The shortest distance across the strait is from the South Foreland, some 6 km (4 mi) north-east of Dover in the county of Kent, England, to Cap Gris Nez, a cape near Calais in the département of Pas-de-Calais, France. Between these two points – the most popular route for cross-channel swimmers – the distance is just 33 km (20 mi).