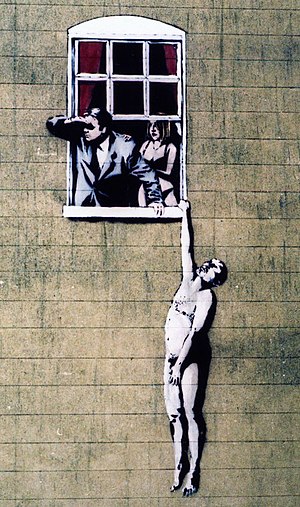 Street art by Banksy in Bristol.

"Painting in the Global Tradition" by Ces53, a Dutch street artist

Street art is like impressionism, cubism or pop art an art movement.

A lot of poor people try to survive by asking a little money in the street. They sometime do the same while making art. These are the "original", "true" street artists. They make music, theatre, temporary paintings on the ground. The other ones are more likely called "urban artist".

A spray can is a artistic tool used by writers on the walls in cities like Philadelphie or New York in 1970. This technique is still used but remain considered more or less as vandalism. One of the most important New York writer wrote SEEN on subways in New York.

The artist Banksy said in December 2010 in a French newspaper called Le Monde (The world) that he has been influenced by the Street art of Paris. For him it is the mai 1968 mini revolution that started the Street art movement. He also mention Stencil artist called Blek Le Rat.

Before Street art emerge there was another art movement called Land art. It was before Internet and before the end of USSR. But after the World War A couple of "Land artists" called Christo and Jeanne-Claude started making illegal art in the street of Paris in 1962 to protest against the Berlin Wall. In 1972, and 1976 they made Land art in the desert of California, building a very long fence. In 1985, they made a huge Land Art work in Paris. They wrapped the oldest bridge of the city with polyamide fabric. They had to negotiate for years to have the permission of doing it. So it was official but it was controversial. Another artist, Richard Serra, put a big wall made of steel in Chicago. It was official but a lot of people hated it and it was removed after a trial. The work of a steet artist like JR is ephemeral so it does not have the same problem.

After the Berlin wall collapsed, a man called Shepard Fairey started gluing images of a dead French wrestler called André the Giant in California. It was a phenomenon. Fairey opened a web site were he just said it was phenomenology. It was so absurd people could not stop talking about it. Stickers were made of the image of the dead wrestler. It was considered "cool" by some skateboarders.[1]

In 1999, in Seattle, took place a WTO (World Trade Organisation) summit. There took place big demonstrations. Others summits took place in Prague (2000) and in Genoa (July 2001). The youth that demonstrate during this summit used "Absurd Propaganda", "culture jamming" and other artistic techniques to "reclaim the streets". After the president Georges W. Bush was elected and the 9/11 (September 2001), the absurd propaganda seemed to have a political meaning. So, critics came to the idea to call that phenomenon artivism. Something part art and part activism.

The art of invading space

In 1999, an artist called Space Invader (he took his name from a video game) started putting little mosaic work in Paris. He started by doing it in a museum called the Louvre. French television showed it. Then he started doing it in every city he could. So he met other artists in other cities. Because his work is not ephemeral but very discreet, the authorities let him do. Only in Amsterdam, the city council decided to officially remove them. In the same time he opened a web site so people from around the world could relay and participate. He invited Shepard Fairey in Paris in march 2003. Malcolm McLaren who invented punk was there to.